Searching for Methane in Net Zero policy? You are not alone…

Will 2021 be the year the Net Zero spotlight shines on methane emissions? At MiQ we hope so.

2020 was a big year for energy policy. The Paris Climate Agreement marked its 5th anniversary; world leaders made many statements about ‘building back cleaner’; countries and regions made bold commitments to Net Zero emissions which included methane – Canada and the EU – while China aimed for zero carbon dioxide by 2060. The UK, as hosts of COP26, attempted to lead the way in setting a climate change example with the introduction of an ambitious target of reducing greenhouse gas (GHG) emissions by as much as 68% within the decade.

However, methane – a highly potent greenhouse gas – remains largely absent from the global conversation, while reducing carbon dioxide is the central focus. We are faced with a need to distinguish between zero GHG and zero carbon dioxide, with different countries looking to reduce different types of emissions.

There are many terms in the conversation on reducing emissions – Net Zero Emissions, Net Zero GHG, Climate Neutral, Net Zero Carbon, Carbon Neutral. For the purposes of clarity, the UK Government’s Climate Change Act 2008 names six major greenhouse gases – carbon dioxide, methane, nitrous oxide, hydrofluorocarbons, perfluorocarbons, and sulphur hexafluoride. We strongly believe that when championing the reduction of harmful greenhouse gases, there needs to be a greater focus on the role of methane. 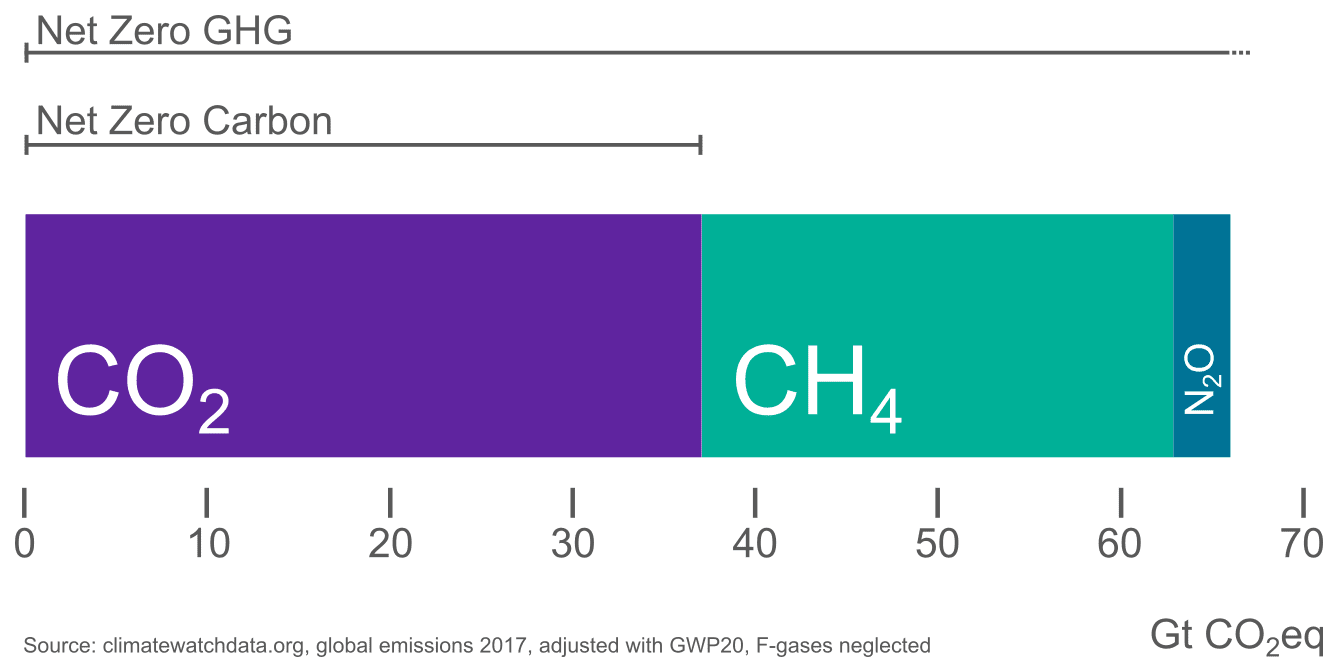 Methane is 84 times more harmful than carbon dioxide in the short term. Globally, methane is the second biggest contributor to climate change after carbon dioxide. The oil and gas industry alone contributes over 84 million tonnes of methane during production and transport to global emissions each year, roughly equal to the emissions from the entire global road transport fleet.

Despite this, methane emissions frequently play second fiddle in the Net Zero conversation. This is, in large part, due to the focus on Net Zero carbon goals only.

For example, in regions that import a significant percentage of the natural gas consumed within their borders, consumption-based carbon dioxide emission targets have been the focus of reduction efforts. This has resulted in a policy lag toward addressing methane emissions at their source (i.e. at wellhead) from the production of imported oil and gas. This is a serious oversight that obscures the reality of the global climate impact of our activities.

Methane on the global stage

There have been recent signs of progress. In October 2020, the EU adopted a strategy to reduce methane emissions as part of the European Green Deal. The EU Methane Strategy stipulates a need to include methane emissions reduction in climate neutrality objectives, with additional legislative initiatives covering the energy sector in the pipeline for 2021.

In December 2020, the Canadian government said it would ‘strengthen’ the nation’s approach to reducing methane emissions from the oil and gas sector by establishing new targets for 2030 and 2035. (We are still waiting for further details on what this will look like, but it is reported as being similar to the EU’s Methane Strategy.)

West Africa countries Nigeria and Cote D’Ivoire both joined the Global Methane Alliance in early 2020. This marked a major step in addressing methane by committing to step up efforts to reduce emissions from oil and gas operations within their borders.

But it appears that, for many countries, separating out methane from carbon dioxide emissions is too tricky, resulting in an unclear path for reducing these harmful emissions.

If we look at China, they have opted to focus on carbon dioxide neutrality by 2060, not GHG neutrality. As China is the world’s biggest source of carbon dioxide and responsible for approximately 28% of the world’s emissions, this is a welcome commitment. But bold policies need to be matched by a holistic approach to clean energy which includes looking at ways to reduce methane emissions as part of the energy transition.

There is a solution!

Is it not a secret – the methane problem can be solved right now. The technology to abate methane already exists, so the next step is for the oil and gas industry to implement necessary changes. The International Energy Agency (IEA) estimates that the oil and gas sector could reduce emissions globally by 75%, and that an average of 45% could be made without a financial impact to companies.

Governments can play an important role in helping the oil and gas industry tackle methane emissions by challenging companies to make the cuts needed and putting in place regulation to make it happen. But this can take time. The industry is not blind to the issue and has made voluntary commitments that have made some progress, but without an independent way of measuring and auditing the reductions it is hard to say exactly how much progress has been made.

At MiQ we understand that without a joined-up approach between both national governments and oil and gas companies to addressing the catastrophic effects of climate change, the ambition of a green future will remain a dream. The impact of global methane emissions is too often overlooked due to the focus on Net Zero carbon dioxide goals. But why is this? Well, the underlying issue is due to a lack of transparency around methane emissions, and the complexity of determining these emissions.

By creating a level playing field for assessing methane emissions at their source – as proposed by MiQ through a low-emissions natural gas certification system – we will provide companies and countries with a unified way of assessing their GHGs emissions. In doing so, we can provide a clear pathway for reducing overall emissions as nations across the globe transitions towards a renewable powered future.

Take a look at the next article →

How to solve the LNG methane question?

If LNG is going to compete against other energy sources for its place as part of the energy transition, then the non-transparent nature of the industry must change, and fast.

END_OF_DOCUMENT_TOKEN_TO_BE_REPLACED

The future must be powered by 100% clean energy. Our mission is to reduce the climate impact of methane emissions from the oil and gas sector until we get there.

END_OF_DOCUMENT_TOKEN_TO_BE_REPLACED

France’s Engie has halted its commitment to a long-term US liquefied natural gas (LNG) import contract with NextDecade Corp estimated at US$7 billion.

END_OF_DOCUMENT_TOKEN_TO_BE_REPLACED

Register your interest today and receive our newsletter. Please complete the form below and contact us if you have further questions.

You can unsubscribe at any time by clicking the link in the footer of our emails. More information can be found in our privacy policy.